Variation on a theme

The News has written an article about the design refinement of the new Westin Hotel at the BJCC, noting the Mayor insisted the architects (Rabun Architects out of Atlanta) take the earlier design and improve it with “wow factor”. On this blog we’d noted earlier our disappointment with the bland, middle-of-the-road architecture first presented, and hoped for something more innovative, special, and welcoming to visitor and local alike. So we’re happy the Mayor insisted on refinement. But what about the result? 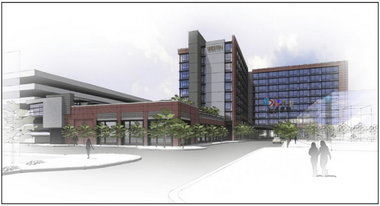 Above is the latest rendering the News posted from the architects, which looks extremely similar to the original shown some months ago, except the facade is now shown rendered in what appears to be red brick. The rendering angle itself is more flattering, emphasizing street-level glass and pedestrians on sidewalks. To answer the Mayor’s wish for a blend of “traditional and contemporary styles”, it also appears the low one story wing in the foreground (with swimming pool on its roof) has been configured as a traditional commercial storefront facade, while the main hotel itself is more “contemporary”.

Without seeing the design for the adjacent entertainment district (designed by local architect Fred Keith of Keith Architecture) it’s impossible to say, but my guess is those traditional storefronts are designed to complement Keith’s district across the street. Rabun is not known for edgy, high-design work. Their corporate hotel clients demand clean, safe, often predictable design. It’s easier to look at this project as a necessary addition of crucially needed rooms near the BJCC, rather than our only chance to have a truly “signature” hotel downtown. I’m confident that chance will come soon, but for now it looks like this project will be an unremarkable 4-star hotel design. Let’s hope the restaurant, public spaces–and the surrounding district of shops, restaurants, and bars–will be as thoughtfully laid out as possible. Perhaps the design won’t win national awards. But with the right mix of tenants it could still prove a solid success for the BJCC, downtown, and the adjacent northern neighborhoods. What’s key is trying to integrate the new construction into the existing downtown and Norwood. If this becomes more than just a BJCC-centric project, and reaches out to surrounding neighborhoods, then we’ve accomplished something. 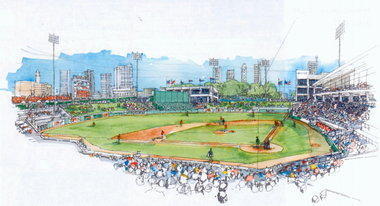 Better near the park

Which brings us to a final note on the proposed new downtown baseball park for the Barons (concept rendering above). The Birmingham Business Journal showed results of an online poll where the majority of all respondents wanted a new ballpark near Railroad Park. Coming a very distant second was the BJCC area. In my opinion, there is much more opportunity for leveraged redevelopment and mixed-use in the Railroad Park area, than near the BJCC. The proximity of the new park, UAB, downtown residences, and the blocks of old warehouses are more promising than the emptied out land by the BJCC, not to mention the freeway connector which for so long has cut off that area from the central core. I know the Mayor and others are working hard to evaluate all options for a ballpark location; my vote is for up near Railroad Park.

[Thanks to markj for the pic of the Tribeca Grand atrium in NYC; the News and Rabun Architects for the Westin rendering; the News for the Ballpark rendering)