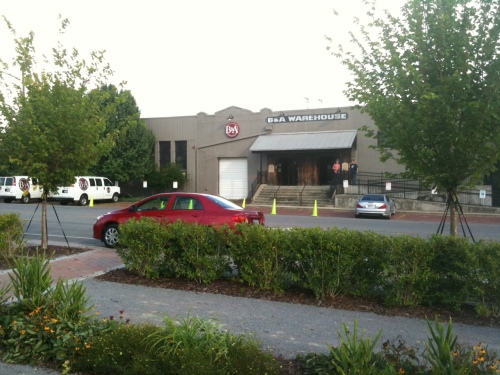 And the times they are a changin'

There have been several recent reports about the one property holder (Bill Mudd) in the proposed multi-block Birmingham Barons’ downtown ballpark site still refusing to sell to the City (see News article about City Council approving the terms of the land agreement). Presumably Mudd, the owner of the B&A Warehouse, which contains an event and catering business under the same name, is hoping for a better deal. The City would prefer not to use eminent domain to acquire the property, but would like to have a coordinated, holistic development of the entire site with no exceptions. Is there a compromise?

As seen in the photo above taken from Railroad Park at First Avenue South, the warehouse in question, while indeed old, does not really contribute to the vitality of the street. This is an illustration of urban change: 5 years ago, when it faced a weedy lot and there were no other nighttime/public uses around it, it felt like a pioneer breathing some life into the area. Now that a large public park has opened in place of the weedy lot, and more public amentities are being planned, the building is not measuring up to its locale. Iron bars hide the few windows facing the park; a loading door and large ramp flank the entrance. The events that take place are private, catered affairs–not open to the general public–and thus are not ideal for a business fronting a public park.

One solution is for the City to agree to let B&A stay, but with a renovation, where a street-side cafe (that could also serve the ballpark) is carved out of the park front, with new plate glass offering transparency and openness.  The renovation would engage the building with the street, the park, and the ballpark. Perhaps the Negro Leagues museum proposed could be built into/above a portion of the warehouse.

Another solution, if B&A was not interested in the above, would be for it to relocate into one of a myriad of similar old warehouses this City is blessed with. There is no intrinsic or unique value to the building they have now, and B&A has proven that people will come to visit regardless of whether their location is edgy or facing a fashionable park.

Hopefully both parties will reach an agreement, with the overall good of the new neighborhood at heart.