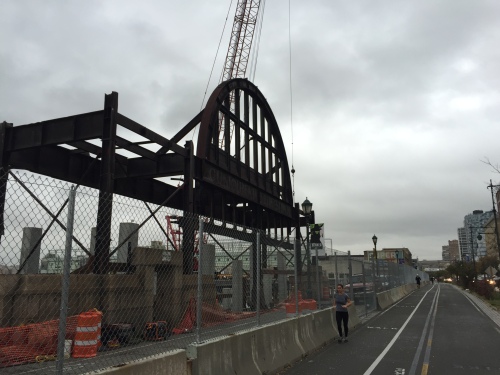 The above was the view from the morning bike commute along the Hudson River: the remains of Pier 54‘s steel entrance framework being dismantled and craned away, as new concrete piers cluster all around. Look closely and you’ll see faint lettering on the main cross beam spelling “Cunard White Star”, the world-renowned shipping line that still operates passenger service between New York and Southampton, UK. Manhattan’s waterfront was once packed with countless shipping piers, and Pier 54 in Chelsea was particularly well known: the Titanic was set to arrive just north of here at Pier 59 (but the Carpathia, loaded with survivors, came instead to 54), and the Lusitania set sail from here on her ill-fated voyage. This skeleton is all that’s left, but its silhouette is a powerful reminder of the past. Now, it appears, this small piece of history is leaving us. 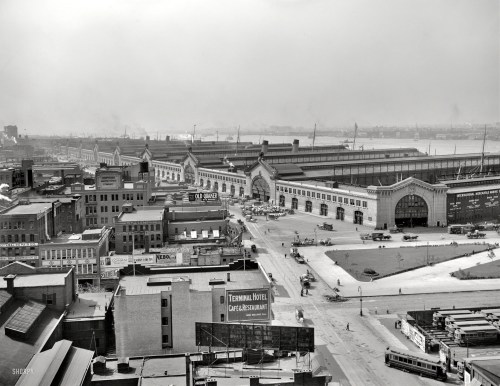 Above is a shot of the Chelsea Piers in their heyday of 1920,  looking south along 11th Avenue with the Hudson River in the background. Designed by Warren and Whetmore, the architect of Grand Central Terminal, it opened in 1910 and the handsome granite facade stretched many blocks to accommodate the biggest passenger ships of the day. Note the large arched openings, of which the Pier 54 skeleton is a remnant. 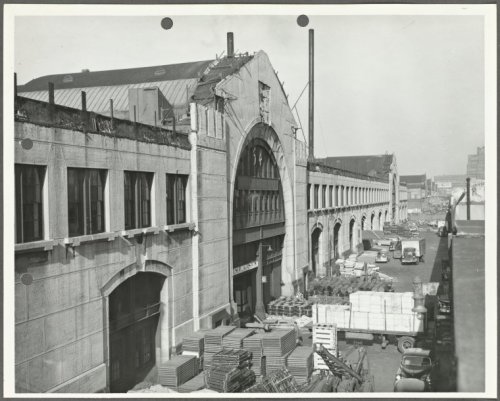 The days were already numbered

By 1930, however, the pier complex was already out of date and new, deeper piers were created further north for larger luxury ships such as the Queen Mary and the Normandie. The Chelsea complex still served smaller passenger ships and commercial craft, but its heyday had passed; the above shot shows how shabby Pier 54 had become by 1951. Within another couple decades, the complex would be abandoned and derelict as container shipping and jet travel made Manhattan piers almost obsolete. 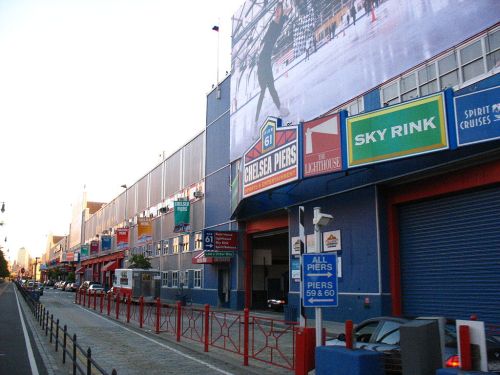 Not the prettiest new facade

In 1994 part of Chelsea Piers was renovated into a giant sports and entertainment complex; the granite facades were removed, and new colorful but cheap-feeling siding and signage went up (above). The old West Side Elevated Highway was torn down opposite, and by the early 2000’s replaced with the West Side Highway and Hudson River Park, with its miles of bike paths, promenades, and walking trails. All generally good things. 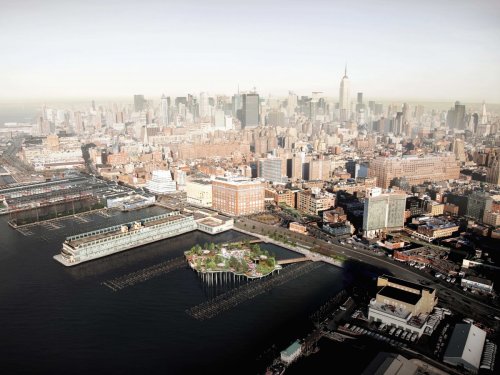 Park of the future

Now, construction is underway on a new Pier 55 park (rendering above–designed by Heatherwick Studio) which has been controversial due to lack of public input and lack of homage to the maritime history of the place (the entire cost of the new park is almost completely financed by the billiionaire Barry Diller). While the rendering does show the skeletal Pier 54 entrance remaining, it’s difficult to confirm this will actually happen. 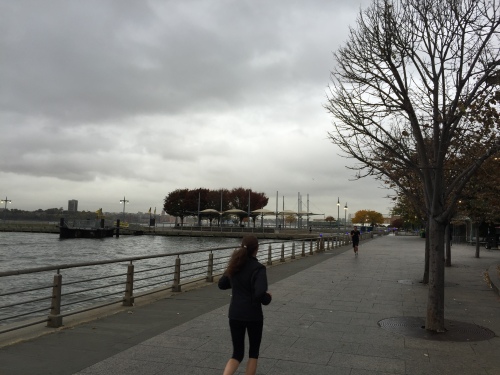 The stevedores are long gone

On the one hand, the new park could build on the very park-like setting that would be totally unrecognizable even 20 years ago along the formerly rough-and-tumble waterfront (above). On the other hand, the Pier 54 entrance is an important piece of history that would be a real shame to lose. Every day on the bike commute it’s a reminder of earlier networks of trade, commerce and immigration that made this city–and country–what we are today. Let’s hope its current dismantling is a temporary one.

[thanks to Bowery Boys History for the historic photos,  Americasroof for the current Sports Complex exterior and Heatherwick Studio for the rendering]