The Lane School--languishing in the shadow of UAB

The News has reported (and editorialized ) the story of UAB offering Birmingham City Schools $3.13 million for the old, former Lane School building at the university campus. The School Board president made a statement that, instead of selling the school, the Board should consider building a new headquarters building there instead (the City School website lists the Lane School as a “surplus property” for sale) .

Rather than discuss politics or the woes of the Birmingham City Schools, this is an opportunity to discuss possible solutions: 1. We have a shrinking urban school system with underused or unused buildings, and 2. the system’s (outdated) headquarters occupies a piece of very prime real estate facing Linn Park at the corner of 20th Street.

What would an enlightened city do?

Let’s start with the current site of the School headquarters on Park Place. 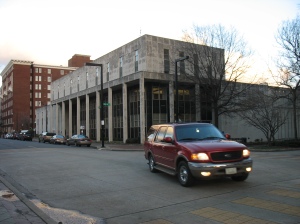 This building, never a true architectural gem to begin with, suffers most from a mismatched location. Not only is it a dated, 3-story office building occupying that prime corner site, but the majority of its facade along 20th Street is the mainly blank wall of the parking garage. Hardly a generator of activity on the sidewalk.

There was a plan in 2004 to build a 14-story Westin hotel here, but the Board has rejected this and all subsequent offers to buy this property (in part due to the perceived expense of building a new headquarters). What if the Board agreed to sell the lot to a developer, and in return a dynamic, mixed-use building including space for a new headquarters was constructed? Or, alternatively, a brand-new charter or magnet school, that could signal the system’s determination to turn things around? Or a combination of all of the above?

This idea has a parallel in Lower Manhattan right now. For years, neighborhood residents have been demanding a new school (K-8) but due to high land costs, it never materialized. In return for certain state and local incentives, a developer agreed to build the new school at the base of a 76-story luxury apartment tower (the Beekman, designed by Frank Gehry; under construction). In the picture here, you can see the brick school at the base of the tower:

We are hardly in New York (but hey, like the new Beekman school, did you know the Advent Day School, a block from the Board HQ, has a rooftop playground?); but what if the current Board site was redeveloped into new board offices, an innovative charter school on the park, and private offices or condos/hotel above. And a great restaurant facing the park? What if?

But what about all the other outdated school structures, like the Lane School? These are dotted all over town–where changing demographics have forced school closures and realignments.  Old schools can make some really awesome living units.  When we looked at renovating the Phoenix Building some years ago, and thought about maintaining the best parts of a historic structure, we looked at various school rehabs across the country for inspiration.  Where else can you live in a basketball court? Check out the Union Square Condos in Grand Rapids, MI—a very innovative transformation of an obsolete neighborhood school.

Or closer to home, the old Crogman School in Atlanta was almost razed. Instead, it became reborn as the Crogman School Lofts, an affordable housing and community center that has helped revitalize a neighborhood.

And prime corner lots facing major city parks need innovative, mixed-use approaches to help spur further growth and foot traffic. Here’s hoping the School Board can strategize thoughtfully and carefully about how it could help it’s own bottom line, while helping the communities surrounding its properties.

11 responses to “School Dazed … and confused”