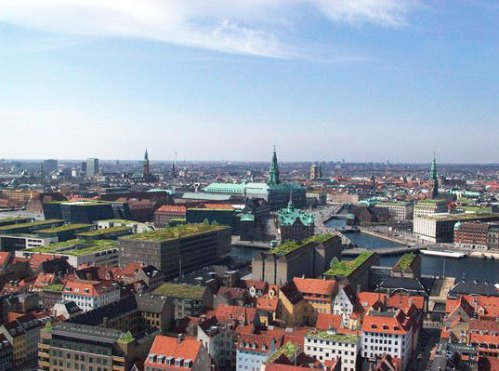 Denmark’s capital Copenhagen has become the first Scandinavian city to mandate green roofs on all new buildings with slopes of less than 30 degrees. You can read the article here–courtesy of inhabitat.

One of the reasons why we don’t have more green roofs in Birmingham is the lack of incentives. While green roofs offer many benefits–they reduce the need for costly storm water systems; they provide great insulation; they prolong the life of the roof; and they help reduce urban temperatures and clean the air–they are relatively costly to install, especially for smaller projects. Chicago had a great plan that gave small residential and commercial projects grants for installing green roofs; Cincinnati offers low-cost loans for commercial green roofs. We are way behind Europe, however, where cities like Stuttgart, Germany have a smart combination of mandates and incentives resulting in green roofs everywhere.

It can be done here too

Despite the lack of local incentives, we were able to design the green roof (shown above) on a new townhouse in downtown Birmingham. It’s one small step forward to reducing energy costs for all of us. Now, if Birmingham could create a Department of the Environment, with a super-progressive director backed by the mayor and council—we’ve got some great citizen and designer interest. We just need a program and some incentives!

Birmingham: the Copenhagen of the Deep South? Dream big.

[thanks to inhabitat for the Copenhagen photo]

I couldn’t resist adding this photo from the December, 1953 edition of National Geographic, showing an early green roof on the top of the A.E. Staley Manufacturing Company, Decatur, IL:

One response to “Rooftop danish”