Art and its absence

Validating our humanity on various levels

As we’ve discussed before, Birmingham has a poor record of supporting public art. While other cities large and small use public art as a routine component of urban revitalization, we have no comparable strategic program here (pictured above is “Chat” in downtown Brisbane, Australia by the sculptor Sebastian di Mauro; the whimsical knit bombing is by others). The absence of a good public art program is ironic given the local artistic talent that the City has, as well as  the ability of institutions like UAB and the Birmingham Museum of Art to attract all sorts of international talent to their stages and walls on a regular basis. 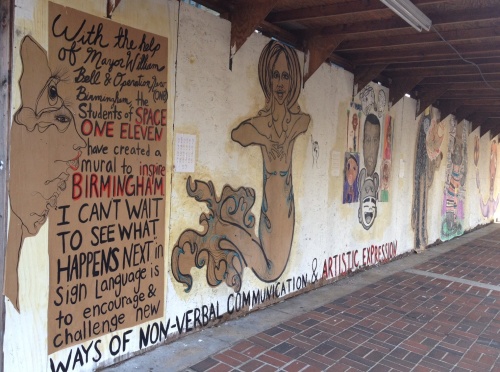 One of our readers alerted us last week to the public art project (above) at the base of the Brown Marx Building. For several years ugly, protective scaffolding has been erected around this large, historic vacant building at the corner of First Avenue North and 20th Street (several plans for mixed-use conversion over recent years have fallen through). Art students with local visual arts non-profit Space One Eleven were sponsored by the City and Operation New Birmingham to create art across the long expanses of plywood. It’s low on budget but high on creative energy. 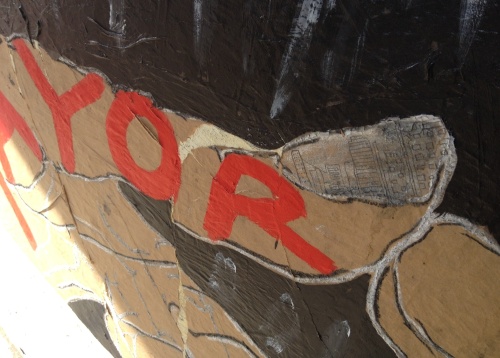 Particularly satisfying was the portrait of Mayor Bell (detail, above), whose fingernail reflects an image of the downtown skyline. We love that.

Feast for the soul

For a major building to present such a forlorn aspect to such an important public intersection is disheartening. The art project goes some way to brightening this condition (and will soon by joined by a pilot project, also sponsored by the City and ONB, to install more art in vacant storefronts along 20th Street). Demonstrating the power of temporary public art is a good start towards implementing a permanent public art program in targeted areas of the City.

That last image of the burger-for-the-soul brings us to a nice tangent–John’s City Diner (above), one of downtown’s oldest extant restaurants, and around the corner from the Brown Marx. The facade experienced an unfortunate renovation–guessing the early 1970’s–with tile and metal siding. Over the last weeks the owners have been partially renovating the frontage, revealing the beautiful art deco detailing still remaining at part of the top floor. Fingers crossed that the canopy and storefront can also be renovated. And that the iconic neon sign can remain lit for many more decades to come.

[thanks to trowzers for the Brisbane shot]

10 responses to “Art and its absence”