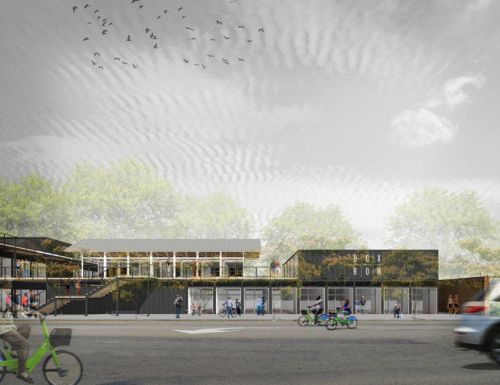 Thinking outside the box

An exciting new project in the Avondale neighborhood, just a short zyp ride from downtown, was announced in the Birmingham Business Journal yesterday (rendering above). The project is on 3rd Avenue South between 41st and 42nd Street and the architect is Design Initiative. The developer cites London’s Boxpark as an inspiration; Boxpark is created from shipping containers, and is intended to provide “pop-up” space for unique, low-cost, highly creative retail, restaurant and gallery space. Birmingham’s version–dubbed Box Row–will offer dozens of containers with simple, affordable pricing and the flexibility to join containers to create larger space. It’s high time the City embraces this type of concept, for many reasons.

If it works in Shoreditch…

We have argued in past posts that there would be a lot more retail downtown and in adjacent neighborhoods if available rental space were appropriately geared towards the young, the creative and the entrepreneurial. While a neighborhood like Avondale has land uses no longer compatible in the current marketplace (Box Row will occupy the former Anchor Motel site), central downtown has too many retail storefronts left over from an era of big department stores and the high-rent retail that clustered around them: they are too large, and rents too expensive, for contemporary urban retail. Charm  on Second Avenue North downtown would not be around if it weren’t for the oddball small space and corresponding lower rent. This could be the answer not just for Avondale, but for vacant lots downtown and in other locales.

The site layout (above) illustrates good urban design: rentable space lines the sidewalk, while parking is concealed to the rear. Terraces afford space for outdoor dining; the composition is a nice balance between the repetition of the individual containers and the contrasting masses of their groupings. At a reported $4.3 million investment, this is a leap forward in how we can re-imagine urban space.

Our own box concept

We’re especially excited because back when the Community Foundation sponsored a 20111 competition for redeveloping a block just east of Railroad Park, our entry was a container box “pop-up” concept (above) that included retail, restaurant and gallery space (the site will now be a public plaza adjacent to the Steam Plant redevelopment). Creatively using container boxes is a proven solution all over the globe at this point; it’s very cool that developers are bringing Box Row to Birmingham. We wish them every success.

(thanks to Design Initiative and the BBJ for the rendering and site layout, and Boxpark for the London image)