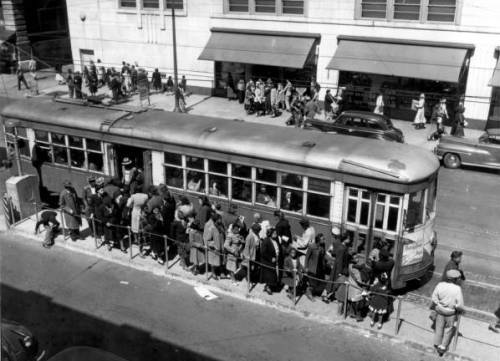 Before there were shelters, there was excellent transit

Our opening photo takes us back to the late 1940s (courtesy Birmingham Public Library) where we see people queuing to board a streetcar on Third Avenue North downtown. While most of us are aware of the ghastly state of our city’s current transit system, today I’m focused on a smaller but important issue: bus shelters. 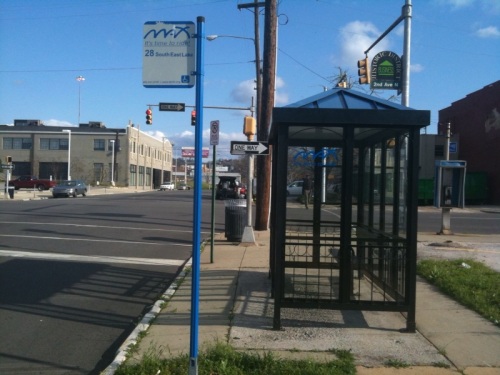 Where's the design in Birmingham?

A relatively recent invention, the bus shelter has become an important piece of street furniture: a well-designed bus shelter can enhance the pedestrian’s (and transit-user’s) experience of the sidewalk and street environment. It can also convey the city’s attitude about urban design. Perhaps 8 years ago, the Birmingham Jefferson County Transit Authority (BJCTA) announced they were replacing old bus shelters across the city. There was talk about holding a competition among local designers for the new shelter. Instead, as illustrated here, what we got was something so banal and un-urban, it boggles the mind. And many, many dozens of these were constructed. The metal members form a claustrophobic, prison-like enclosure, with no panels for signage, advertising, or route information. All normally basics for a bus shelter. 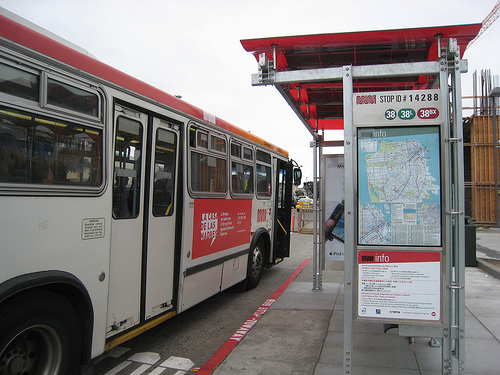 As a counter example, consider the new prototype shelters going up in San Francisco. Simple and elegant, one side contains space for advertisements (an important source of revenue for most transit systems) and the other side has info panels, maps, and in most cases updated electronic MUNI schedules. I love the design of these shelters–not only do they have red, translucent undulating tops (created out of recycled resin by 3-form), but there are solar panels embedded in these roofs that power the illumination of the shelter at night. Note also the large, graffiti-proof and shatter-proof resin panels at the rear, unencumbered by fussy, prison-like metal bars. It’s all very open, airy, and inviting. 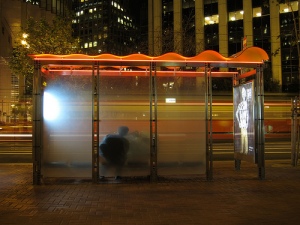 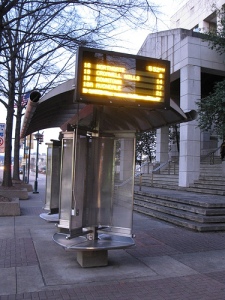 User-friendly and inviting in Chattanooga

And lest we think it’s silly to expect the same sort of thoughtful design here as they get in a big city like San Francisco, turn to Chattanooga, a metro half our size to the north. The shot below shows a shelter on Market Street. Not quite as integrated in design as SF, but still good. And not only does it have electronic schedule info, but it conveys to users and visitors that the city cares about design and the urban experience. There’s thought behind it.

If you gave me a choice between good bus shelters and a good transit system, of course I’d take the latter. It’s a pressing need for our region. But part of making a transit system attractive is making its accessories attractive. I earnestly hope that when we do get the long-overdue overhaul of our transit system, we’ll also find the best designers to develop graphics, way-finding, and bus shelters. It’s one more piece of the urban puzzle we shouldn’t overlook.

Just like there’s a synergy between good transit and good shelters, the opposite is true. Our poorly conceived shelters are predictable given our poor transit. I mentioned earlier there is no panel on our standard shelter for signage, graphics, or info displays. However, as an afterthought, the BJCTA slapped some vinyl stickers on certain shelters warning “NO LOITERING”. That’s the only message conveyed in writing on the entire shelter. Here you see someone doing just that–loitering in a shelter. How do I know he’s loitering? Well, it’s just a good guess, because it’s Sunday afternoon. And a quick check of the BJCTA schedule shows no Sunday routes except the DART. If you look closely you can see the warning printed over his head…(thanks to richmondsfblog, almonroth, and zekumedo for the SF and Chatta. pics) 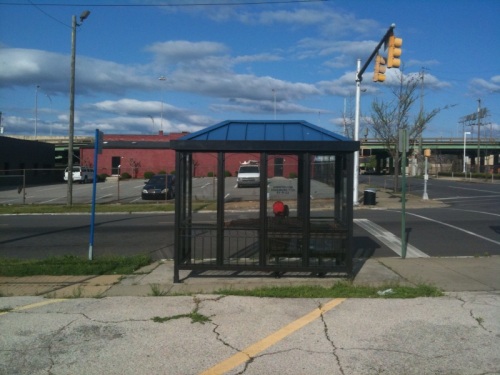 Emblematic of a culture of neglect