The Birmingham Business Journal reports this morning that Southtown Court, a public housing community administered by the Housing Authority of the Birmingham District, may be transformed into a mixed-income development pending a Federal grant award (Google Streetview above, taken at University Blvd. and 24th Street looking east, with Southtown on the right and the new Veteran’s Administration parking deck to the left). Built in 1941 as temporary housing for working class families, like other similar developments all across the US it has in later years become considered as permanent housing for low-income people. Southtown in particular, with its proximity to wealthier and well-traveled precincts (UAB, St. Vincent’s Hospital, Highland Park), has long been discussed as needing renovation, or even  repurposing. In the past, HABD has resisted wholesale change; now they are leading the effort. 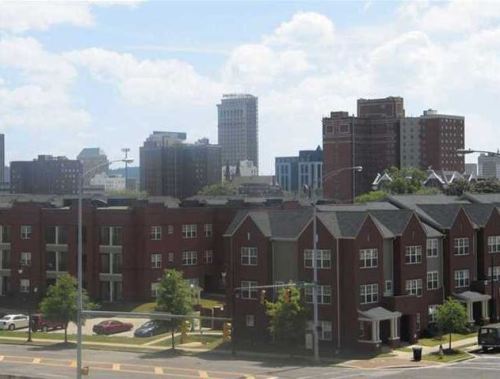 Park Place, pictured above looking west from 26th Street and 7th Avenue North, is an example of HABD working with private developers in the mid-2000’s to totally transform the former Metropolitan Gardens housing community in the heart of the CBD. Credited with aiding perceptions of downtown (reduced crime, improved aesthetics) it was also controversial for its displacement of low-income people who could no longer afford to live in the new development, or for whom there was simply no room (fewer units emerged in the new project compared to the old one). With the disappointingly designed Veteran’s Administration Clinic about to finish construction on University–future post about that one–one can only hope that if a new Southtown emerges, it will be more thoughtfully designed (and include commercial/retail components which sadly Park Place did not). 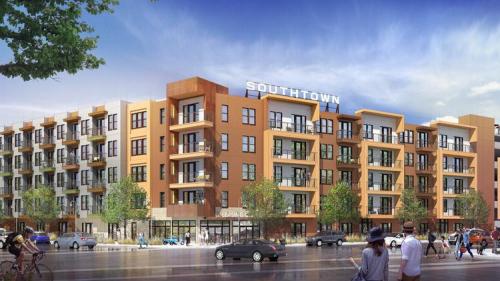 With all of the generic “urban developer style” projects going up around downtown, could this site pave the way for yet another one (above project in San Antonio, TX)? As the process unfolds, we’ll explore what needs to happen on the Southtown  site in more detail: with 25 acres in such a visible, high traffic area, the possibilities are pretty endless.

(thanks to Google Maps, HABD and San Antonio Business Journal for the images)

This entry was posted in Uncategorized and tagged Housing Authority of the Birmingham District, mixed-income housing, Park Place, Southtown Court. Bookmark the permalink.