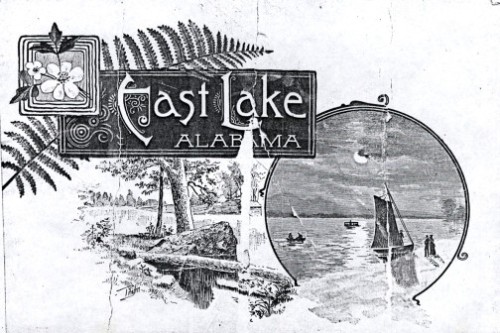 A more sylvan past

The Birmingham neighborhood of East Lake,  once home to a “suburban” pleasure resort and tidy Arts-and-Crafts bungalows, has seen its share of hard knocks in recent decades. Shifting demographics, disappearing business bases, and car culture have all taken their toll. Architecturally, while quite frayed and beleaguered,  downtown East Lake has maintained a fairly consistent streetscape, with most of its storefronts intact, if vacant. Or occupied by marginal businesses. Or even businesses that appear to be anything but marginal, judging by their heavy traffic: 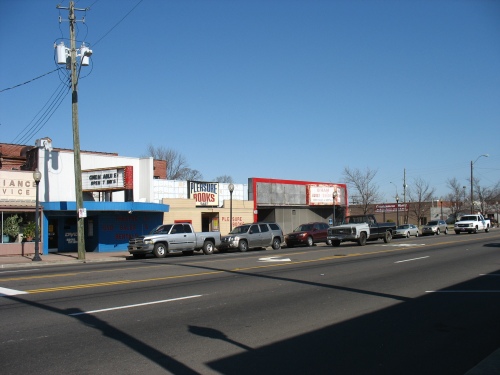 Judge not lest ye be judged

Above is the row of “adult” establishments on the north side of the 7600 block of First Avenue North. The neighborhood, with many typical “inner city” woes, has seen recent bright spots with artists and others moving in to take advantage of the cheaper housing stock. An East Lake Arts District is a relatively new concept promoted to induce more artists to move to the neighborhood.

On the south side of this same block is a continuous wall of historic storefronts. Almost all the buildings are owned by Vince Amaro, of Amaro Development and Construction (no website available). At Design Review Committee today, it was revealed that Mr. Amaro was granted a demolition permit for one of these buildings, to tear it down for replacement by a surface parking lot. Through no fault of Mr. Amaro’s, this permit was granted erroneously, meaning the City is supposed to send an applicant first to Design Review for approval before demolition within an historic or commercial revitalization district. Mr. Amaro started demolition recently; most of the building is now gone except for the four exterior walls. 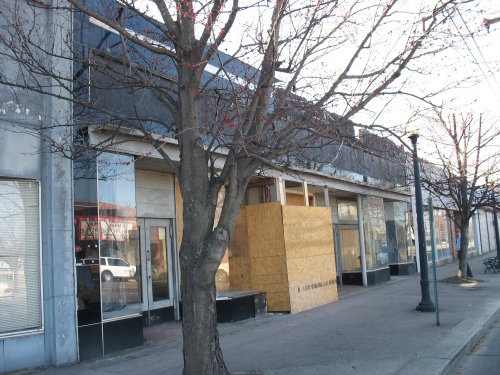 Another case for a redevelopment authority--and smartcode

Above is the building in question. Mr. Amaro’s intent is to create a parking lot to serve the other buildings, into which he hopes to bring new businesses (he has an appliance store and a gym already slated for an adjacent building, which he is renovating–to a design approved by the normal Design Review process). To those of us who understand the value of the building line, and the anti-urban nature of surface parking lots, it’s sad. What could have helped avoid this situation (besides the obvious improvement in communication between the Planning Department granting demolition permits and Design Review)?

1. If the City had a redevelopment authority in place, these buildings could have been purchased long ago, with the vacant land across the street redeveloped as parking accessed to the rear and new structures at the sidewalk, with incentives offered to developers chosen to implement specific goals;

2. If the City had SmartCode in place, this block could require certain attributes such as building facades brought up to the sidewalk, and could prohibit surface parking visible from the street;

3. Mr. Amaro, barring the above, would be courted by local neighborhood organisations and a compromise could be worked out where the front facade was retained, and the parking was built. 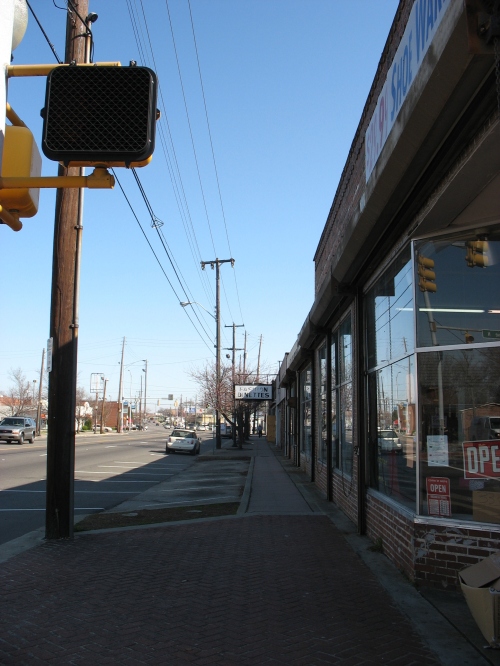 As it is, with none of the above occurring, Mr. Amaro is left more or less to his own devices. In his opinion–and there is much to sympathize with this–he is investing time, money, and faith into a block that few others want to touch–and that the demolition of one building to provide parking for others he wants to renovate seems reasonable. One wishes him well in his efforts to revitalize the block. One also wishes that there were a better framework in place to prevent the ad hoc nature of this demolition permit.

Most of all, one wishes there were a really good strategic plan for this block that could be implemented by a redevelopment authority, or at least SmartCode that would let developers know what to expect up front.

This author personally tried to convince Mr. Amaro this morning to at least consider saving the facade, I’m afraid to no avail. He plans to continue demolition and complete the process by week’s end.