Squint and you could almost see Jane Jacobs

Being able to experience New York City on a regular basis means sharing scenes of life in the big city. Above is Soho, whose many high-priced boutiques, hordes of tourists, and designer brands have melted away to reveal, at least at this intersection of Thompson and Prince Street, a Jane Jacobs-esque tableau of local shoppers, humble corner store, and lots of finely detailed and humanely scaled buildings.

Steady as she goes

A few blocks east, the above scene was witnessed: a massive bronze sculpture being carried out of a gallery and onto a waiting truck. The difficult process was spellbinding. 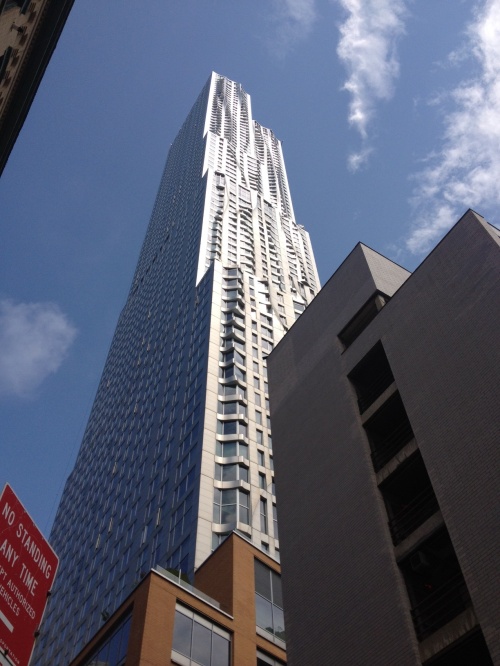 Well now we know where the budget got cut

New York by Gehry–the tallest apartment building in the country (designer: Frank Gehry)–has an undulating facade that’s strikingly beautiful. Unexpected is the “back” facade (left, above) which has no undulation. It’s a decent enough foil to the articulation of the other 3 sides, but is still disappointing in its sheer flatness.

A matter of scale

Above is a corner of the 2nd floor courtyard in our building in the upper reaches of Hell’s Kitchen. The massive size of this new project (designer: Enrique Norten) testifies to the continual demand for housing in this city.

Madison Square Park (above) and Broadway adjacent are brimming with well-kept landscaping, seating, and diverse buildings that frame views. Note the branded neighborhood banner; if you look closely, you’ll see that Con Edison is the banner sponsor (a clever way of engaging the private sector in public place making). 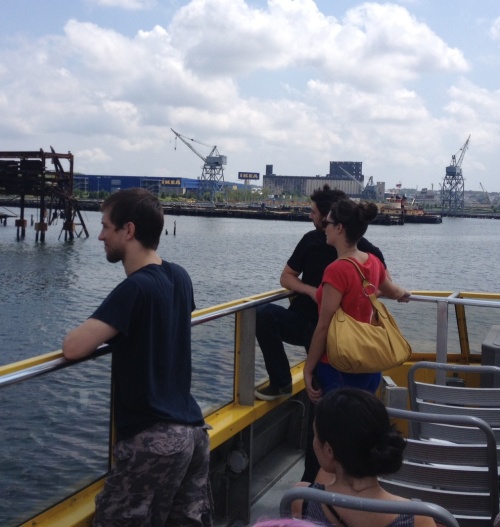 Who needs the Hamptons?

Finally, a somewhat dreaded trip to the IKEA store in Red Hook, Brooklyn became an unexpected pleasure: above is the complimentary ferry service that leaves from the Wall Street area and sails in about 15 minutes to the IKEA pier. Fantastic views of the city skyline and Lady Liberty, out on the water on a glorious summer day, completely gratis: does it get better than this?