And the prize goes to… 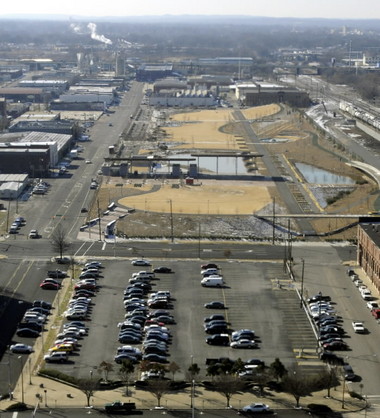 Yesterday local media reported that the City-owned block directly east of Railroad Park (above) is poised to be sold to Alabama Power Company for almost $3 million. Currently surface parking, the lot was the subject of a well-publicized “ideas contest” in 2011, which resulted in a winner being awarded $50,000 by the Community Foundation. Many were excited by the high-profile nature of the contest, the professionalism of the process, and the engagement of the community–through crowdsourcing— to help determine the future of our built environment downtown. It was much more difficult to find anyone excited about the actual winning entry, which struck many as a confusing grab bag of odd components.

Perhaps even more perplexing was how the contest, and the winning entry, disappeared from public view almost instantly: after all the publicity and community engagement, the radio silence was quite a contrast. Very little has surfaced about the project since the Foundation announced this past March that they’d seek proposals to develop the site using the themes outlined in the winning entry. Now, Alabama Power steps in to purchase the property which lies across Powell Avenue from the historic steam plant the company already owns (and is on the verge of decommissioning).

The Foundation expressed its support for this latest development in a brief statement on their website. Since there are no details about the nature of the development, we can’t really comment except to hope that if this purchase does go through, that Alabama Power is able to put together something really exciting and community-oriented for both this lot and a renovated steam plant. The curious fate of this property now moves into an interesting next phase (the City Council should vote on the sale today). Stay tuned. And just for fun, below is part of our own entry into the contest. 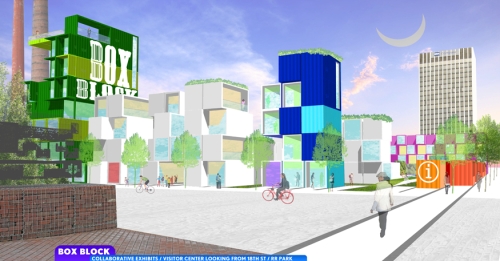 [thanks to the Birmingham News for the aerial pic]

UPDATE: City Council approved the sale today, and the Community Foundation said they endorsed the sale due to pledges from APCO that the ideas generated by the contest would be incorporated into future plans.

7 responses to “And the prize goes to…”