What can we learn about Birmingham and its urban core after comparing it to Mobile’s, the third-largest city in the state (but second biggest metro, at about half the size of our 1.2 million)? On a recent trip I was able to get a quick glimpse of downtown Mobile, and observe some interesting things. 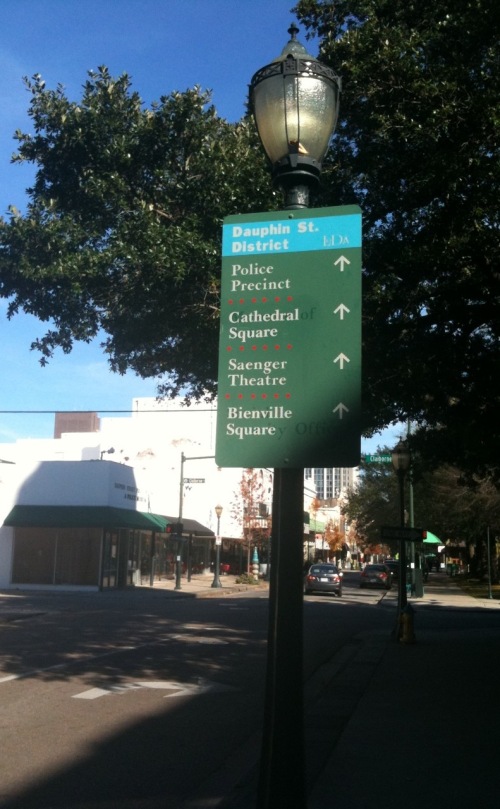 Pointing in the right direction

First, wayfinding. Central Birmingham has basically none–and we need it. Bad. For anyone visiting (whether from afar or just the ‘burbs), graphically clear signage which helps you navigate a city is essential. The above is an example of signage found throughout downtown Mobile–simple, to the point, and informative.

Second, good urban signage. Birmingham–thanks in part to enlightened members of the Design Review Committee, is more likely today to approve well-designed, projecting and/or illuminated signage for businesses in our urban areas. But the process can still feel like a struggle (one sign we designed for a project downtown took over 3 months to work its way through the City Legal Department after DRC approval). To the left you see some excellent signage at the hip Dauphin Street Taqueria ; in downtown Mobile, the city has a financial incentive to encourage owners to upgrade signage and illuminate it. Fantastic incentive, and the nice projecting signs across the core are a testimony to its success.

Third, Mobile’s older street grid means narrower dimensions–so instead of our wide avenues with 5 or 6 traffic, turn, and parking lanes–you get 4, or 3 total lanes which makes for a more pedestrian friendly environment (quicker to cross, and less traffic on the streets). Below is a shot looking towards the Battle House Hotel, Mobile’s smaller version of our old Tutwiler Hotel, demolished in the 1970s for the First Alabama Bank Building. In Mobile–where development pressure downtown was so slight, it makes Birmingham look like an Atlanta–the hotel was just quietly boarded up and remained vacant until the Retirement Systems of Alabama incorporated it into its huge RSA Tower complex completed a few years ago. Because of the RSA’s muscle, downtown Mobile now has 2 4-star Renaissance hotel properties–while Birmingham has no 4 -star properties anywhere close to downtown (though a Westin is planned to break ground shortly).

Fourth–of interest to those saddened by the demolition of the old Birmingham News building for the creation of….a surface parking lot: in Mobile the local Press-Register donated their old facility to a non-profit called Center for the Living Arts which promotes the arts throughout downtown Mobile. An 8000 SF center for contemporary art is part of the new reuse of this building, seen below: 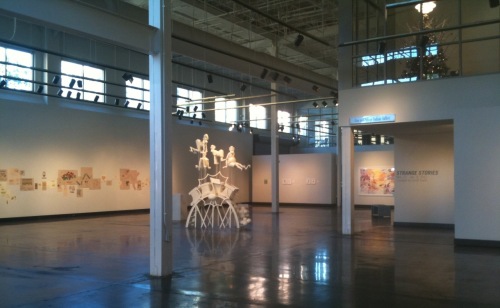 A better use than surface parking

Yes, we’re thrilled the News built a new facility downtown. It’s just a shame that instead of visualizing a new use for an outdated building like they did in Mobile, they tore it down for a few parking spaces instead. A very, very 1969 solution to a problem.

Which brings us to the train station. In 1969 we tore ours down. Mobile’s still stands, although mostly vacant (they lost their passenger service long ago), and at a disadvantaged location down Water Street (it was a hardy 20-minute walk down a warehouse and gas-station-laden 6-lane highway from the Battle House). If Water Street could be re-envisioned as a pedestrian-friendly boulevard, with mixed-use and a waterfront promenade–then the old station could be a wonderful terminus again.

Mobile’s core is much smaller than Birmingham’s by any measure–fewer office workers, fewer residents, fewer buildings–and the scale is very different. It feels more like a small city than, well, a medium-sized one. This smaller scale is one factor that can make redevelopment easier. Lower Dauphin Street is lined with bars and restaurants and even some retail shops–but all the buildings are mainly one or two stories. Big, complicated, and expensive redevelopments are not necessary on this scale.

However, some basics of adaptive reuse, signage, even public postings of imminent Design Review hearings are all instructive as we work to create a better Birmingham. It’s clear that Mobile has made some real efforts to reinvigorate their center. And, the City is considering adopting SmartCode for their downtown, similar to Montgomery, to help propel development in the right direction. This is something we’d love to see here too.

On a last note, I couldn’t help notice that city parking meters downtown allow 15 minutes per quarter–rather than the 60 minutes per quarter in Birmingham. And we have a much, much more congested downtown than Mobile. I believe Birmingham ranks as one of the largest cities with the cheapest on-street parking. This puts more cars on the street, circling for those cheap spaces–rather than considering decks, or walking, or transit. We’ve got to get used to paying more at the meter here.