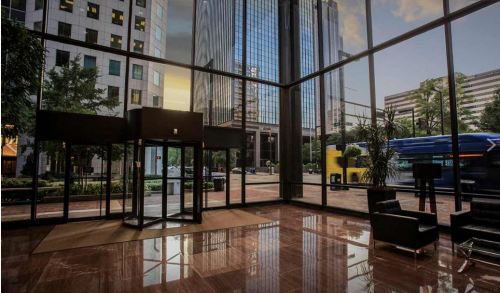 Center of corporate Birmingham about to get a little denser

Al.com is reporting today that VIVA Health, an HMO, is expanding its downtown headquarters at 20th Street North and 5th Avenue, resulting in up to 400 new jobs being added to the City Center. While the bricks-and-mortar impact won’t be immediately visible from the street—the expansion involves renovating existing empty floors within the building—downtown should feel the impact in a couple significant ways. One, more foot traffic and demand for retail services; two, a reduction in the overall vacancy rate of the Downtown Submarket which currently stands at 11.9%, slightly better than the metro average (current VIVA lobby, above).

Coincidentally, the news comes on the heels of another local healthcare corporation’s announcement about its own headquarters: HealthSouth, currently located on Highway 280 and Grandview Parkway (within the City limits of Birmingham but 9 miles’ distance from downtown) will build a new headquarters building in Liberty Park (again within Birmingham City limits, and about 15 miles’ distance from downtown). Unremarkable, except for the fact that HealthSouth had seriously considered moving to Parkside, the burgeoning downtown neighborhood, and constructing a signature headquarters building there instead. In a recent article in Al.com, CEO Jay Grinney defended the decision to stay in a distant location rather than join the increasing numbers calling the City Center home. The main factor, he claimed, was a company-wide poll of employees who were posed the question: Would you rather work downtown or Liberty Park? This poll came back with a solid majority in favor of staying south of the City, and he couldn’t bear the thought of all those unhappy workers stuck in traffic headed into downtown daily. 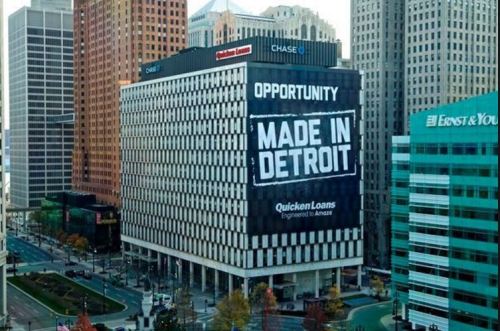 Birmingham is not known for corporate leadership that looks beyond parochial concerns to support the greater community in an impactful way. Parisian CEO Donald Hess arguably came close by stepping up to chair the failed MAPS campaign of the late 1990’s (incidentally also supported by the former HealthSouth CEO Richard Scrushy). But we’ve had no equivalent to Quicken Loans CEO Dan Gilbert who moved 1,700 employees into a new downtown Detroit headquarters in 2010 after 20 years in the Detroit suburbs. This move is widely credited as crucial both literally and psychologically to that city’s current comeback; Quicken now has 12,000 employees in and around downtown and has decided to house them in formerly vacant buildings rather than build a glossy new tower (renovated Qube building above). Rebounding cities need lots of ingredients—from grassroots individuals to corporate CEO’s—to create a truly vibrant and diversified environment. One can only imagine if Gilbert had taken a “Would you like to move to downtown Detroit” poll of his employees back in 2005 what the response would’ve been—surely even more negative than the HealthSouth poll–but ultimately the workers now enjoy all sorts of urban amenities and conveniences they couldn’t have envisioned 10 years ago, and the downtown Quicken campus is consistently rated by employees one of the best places to work in the Detroit metro. 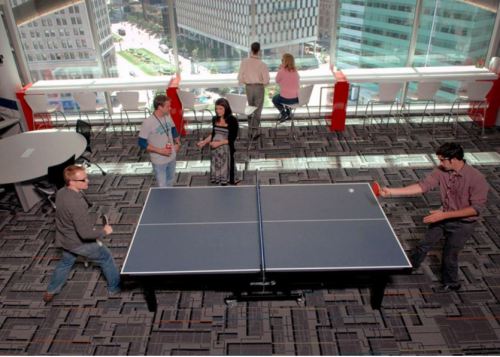 In the end, however, this week’s news is positive: VIVA is expanding, and HealthSouth, a company with 23,000 employees nationwide valued at $2.3 billion, remains headquartered in the City. What Birmingham truly needs is an influx of new people moving here from outside the metro, attracting new ideas to the area and expanding the economy (above, young employees take a break at Quicken downtown). For too long we’ve been playing a shell game between City and suburbs; instead we’d rather see a growing City, healthy suburbs, and all local municipalities banding together to attract new jobs to the area. As exciting as a new HealthSouth HQ may have been on the Midtown skyline, it would be a much, much bigger story if we could attract a Fortune 500 company from outside the state to do the same.

[thanks to West Second Street Associates for VIVA lobby pic; glassdoor.com for the Quicken building pic; and retaildesignblog.net for the interior Quicken rec room pic)