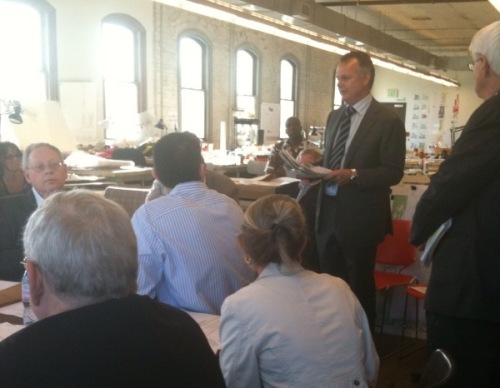 An impassioned defense of an urban neighborhood

What happens when you put Poulet Rouge on the same platter next to Chick-n-Strips? Well, we learned the answer this past Wednesday when Frank Stitt, chef/owner of Highlands Bar and Grill, Chez FonFon, and Bottega Restaurant and Cafe, spoke eloquently against a proposed redevelopment of the corner of Highland Avenue and 20th Street into a drive-through Chick-Fil-A Restaurant (he’s pictured above addressing the City’s Design Review Committee). His reasoning (echoed by other merchants present as well as the president of the Five Points Merchants’ Group): 1. The alley which accesses the drive-through queue is an active alley used for deliveries for his restaurants; 2.  Car traffic will increase, possibly dangerously, at an already busy intersection; 3. The fumes of idling cars and the noise from the “squawk box” will affect not only his diners at the patio across the alley but the elderly lady who lives in one of the last remaining Victorian mansions on Highland Avenue next door; and 4. A drive-through is incompatible to an historic, vibrantly pedestrian neighborhood. Of course Number 4 is the most important reason for everyone to be concerned about this sort of proposal, regardless of whether you plan to dig into Moules-Frites across the alley or not.

I’d like to set the record straight here. Over on the al.com blog there’s been a lively discussion about Frank Stitt and his opposition to the development (you can see it here). First, Frank was only the most famous of other merchants and neighbors who all stood to speak against the idea of a drive-through. Second, Jim Little, who heads the Five Points South Merchants Group, also stood to express his organization’s disapproval. Third, I’ve spoken personally with Frank Stitt and he is clear: he, and his fellow merchants and neighbors, are not opposing Chick-Fil-A. They are opposing a drive-through.

The argument is not about haute cuisine vs. the mass market

This in fact is a rather populist protest against an Atlanta-based corporation wanting to impose a suburban design on a neighborhood that’s one of the most urban we have. So charges of elitism/arrogance, in my opinion, are best directed at the corporation–not at the neighborhood. 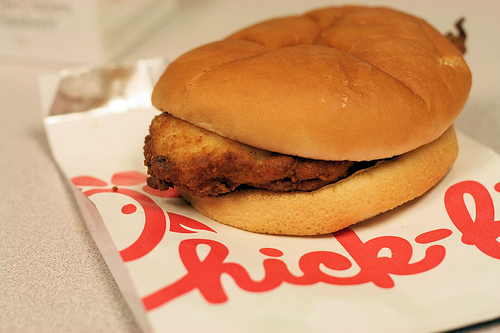 Now let me try to briefly explain the options available to resolve the situation. This property is located in an official Commercial Revitalization District, as well as in an Historic District listed on the National Register. Any proposed alteration or change to property in such districts must come before the Design Review Committee. The DRC, however, must abide by City zoning law in making its approvals. In Birmingham’s zoning code, drive-through facilities are allowed in all commercial areas without restriction. Therefore, the DRC, while its members appeared unanimous in their opposition to a drive-through, cannot in the end stop it. They have to follow the current zoning rules.

What could be done to help this situation? Three things come to mind:

1. The City amends its zoning code (as other cities have done recently) to restrict new drive-through facilities in certain areas (grandfathering extant facilities).

2 The City adopts a Form-Based Code. Such a code provides regulations beyond the normal zoning code, to help better shape development especially in key areas of a city. Part of this new code could restrict drive-throughs in certain areas. (The town of Seaside, Fl. was the first example of a modern form-based code. See this interesting illustration of  form-based code principles here, from the new code adopted recently in Miami).

3. The City creates a Redevelopment Authority. Such an authority typically has the ability to develop urban design plans, acquire and/or promote key properties for redevelopment in accordance with the plans, and act as the developer in certain instances, sometimes in conjunction with private investors or developers.

4. The Five Points Historic District organizing papers are amended to specifically prevent drive-throughs within the district.

Based on discussions I have had with people familiar with the above options, our City lacks the political will to implement either a Form-Based Code, a zoning change, or a Redevelopment Authority (in part due to opposition from local developers who imagine such changes would be bad for business). Such lack of political will, matched with opposition from the development community, keeps our city from progressing like other cities which have one or more of those tools at their disposal.

And in the meantime, drive-through or not, a very prominent corner in the heart of a diverse, pedestrian-friendly district is getting a free-standing, suburban-style building surrounded by a sea of parking. As Cheryl Morgan of Auburn’s Urban Studio put it, “parking spaces don’t produce revenue.” The neighborhood, visitors, and the City would be much better served if a higher and better use were contemplated for this site, one that included multiple tenants opening directly on the sidewalks, with limited parking in the rear. This is one rare part of town where people get out of their car and walk, as Frank Stitt pointed out. Here’s hoping Chick-Fil-A will listen hard to this community and reconsider this plan.

[thanks to cathydanh for the Highlands dinner plate,  jreed for the Chick-Fil-A sandwich, and Five Points South Merchant’s Group for the overhead view of the site and surroundings]

Today’s light-hearted Friday post is about restaurants. Eating out has been an essential part of the urban fabric in bigger cities (starting in the late 19th century); in the last few decades, it’s become pretty essential all over the place. Birmingham has more than its share of excellent restaurants at the high end (think Highlands, Cafe Dupont, or Hot and Hot Fish Club), or at the economical end (think Rojo, Makario’s, Zoe’s). Unless you’re at a typically mediocre chain restaurant, there are fewer options at the middle end (Trattoria Centrale, please start opening other nights besides Friday!–thanks to bradford for the pic).

The chef at Trattoria Centrale turns out some amazing pies downtown

This is why we’re excited about two things: one, we hear that Urban Standard is planning to start regular dinner service offering innovative, casual dining under the able stewardship of Chef Zachary Meloy. This place has become a community hub, not just for the neighborhood, but for many others who feel right at home when they visit. My hope is this knitting together of community will now continue into the evening hours on a regular basis.

Second thing: as many now know, a new restaurant called Brick and Tin is set to open in a few months on 20th street in the former “Dress for Success” storefront. (photo courtesy pallid7) 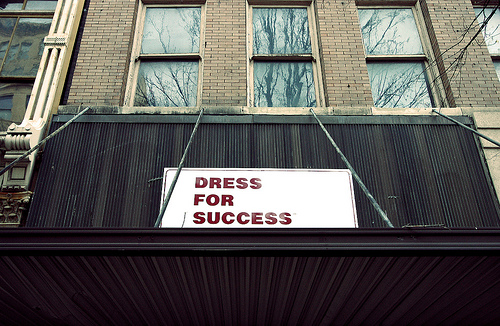 Chef Mauricio Papapietro (who, like one of the chefs at Trattoria Centrale across the street, trained under local superstar Chef Frank Stitt), plans a gourmet sandwich place that will focus on lunches initially. Dinner will hopefully follow soon.

For most people, whether consciously or not, the architecture and ambience of a restaurant at any price level is an important part of the experience. You expect a lot of thought to go into restaurant interiors at the upper end, but it’s nice to go to more moderate restaurants and find exciting design as well. This tends to happen more often in larger cities where the importance of hiring a good designer is seen as necessary for business, rather than an expendable luxury (or even a nuisance) as is too often the case in a smaller place like Birmingham.

Flip Burger is an example of a moderate restaurant here with a very high quotient of design. From the logo, to the menus, to the booths, to the food itself, everything is rigorously thought out and tied to a strong central concept.

In the big picture, there’s nothing truly original about Flip Burger’s concept–hip, design-heavy fancy-burger spots have proliferated across New York City for a couple years now. But this is a rare instance in Birmingham to see such a thorough design concept carried through from start to finish in a restaurant. And refreshingly, there’s nothing conservative about this design either–no stained wood chairs, “retro” pendant lights, or any of the other banal elements that are too often strewn over our dining landscapes in town. (photo courtesy cathydanh)

Back to Brick and Tin–while I’m not privy to the design plans (local firm Hendon and Huckstein has been engaged), the name reminds me of English or neo-English gastropubs. Helping revitalize the food environment in a country until recently not known for innovative cuisine, the gastropub refers to an older pub (which used to just serve beer, spirits, and snacks) which has been converted to serve full meals, often with a gourmet bent, moderately priced, and riffing on traditional English cuisine. In this country, it has a broader definition (as there are no real historic pubs to convert): a moderately priced restaurant with design cues taken from the UK’s typical pub, and where beer  can take precedence over wine as the beverage of choice with dinner. An example is the new Againn gastropub in DC.  Sitting at the long bar (or in booths) enjoying good food and beer at moderate prices within a charming, well-designed environment is the sort of thing we need more of here.

One last word (for now) on restaurant design: one of my favorite designers, Karim Rashid, was asked several years ago (actually 2001; I can’t believe it’s that long) to design the interior of Morimoto in downtown Philadelphia–a city which, like the UK, was not terribly known for its cuisine (Philly Cheese Steaks excepted). This is an incredible example of high-concept restaurant design, and an early innovator of integrated LED lighting (the booths and walls slowly change colors as you eat). It also inspired many other restaurants to open downtown, and now the restaurant scene in Philadelphia is transformed. Here’s to more options, better design, and new cuisines coming to town. And yes, I would love Karim Rashid to collaborate on a restaurant design with me someday. Right here in downtown Birmingham. (Morimoto pic courtesy bombtrack)