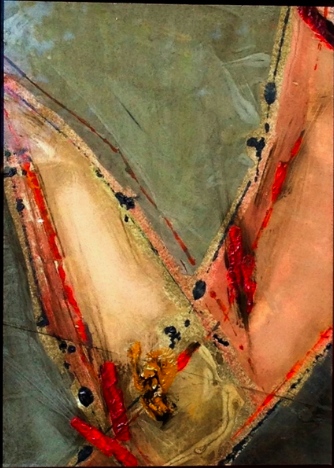 This Sunday, February 24, Ellen Cooper Erdreich will exhibit paintings and drawings at the Phoenix Building downtown (corner 2nd Avenue and 17th Street North) with an opening reception from 2-5 PM–loft 409. Please consider coming to view this show. Full disclosure: the artist is my mother. [image above from the show: “ex vulvere mori”]

As we’ve discussed many times, art and artists are essential to the vibrancy of any urban center. We are proud that the Phoenix Building we developed offers reduced rents in the majority of its lofts, most of which are rented by artists. Hopefully more similar projects will follow soon. Enjoy the art, and see you Sunday.

[thanks to Ellen Cooper Erdreich for the images]

Can we afford it? 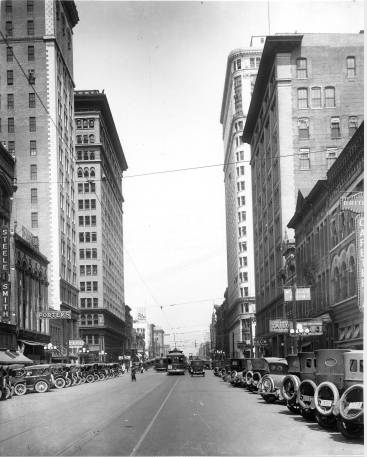 Recent reports in the Birmingham Business Journal have quoted the new owner of the historic Empire Building (First Avenue North and 20th Street) as wanting to redevelop the building into “low-income housing” as opposed to the boutique hotel he’d originally suggested. The reason stated was financing would be easier to come by. Two things are clear: one, the Empire is one of the City’s most recognizable and important buildings, due to its membership in the “Heaviest Corner on Earth” collection of early skyscrapers which formed the nexus of downtown for decades (seen above, first tall building on the left, in a photo ca. 1918). Two, this City has a huge need for more quality affordable housing. Does it necessarily follow that this project makes sense? 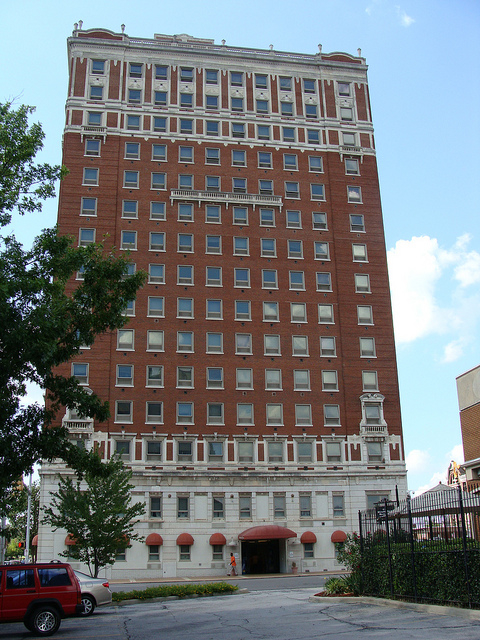 Affordable housing projects downtown have had mixed success. Older developments such as the conversion of the historic Bankhead Hotel into a Section 8 housing development for seniors (above, Fifth Avenue North between 23rd and 24th Streets) often have reputations for poor management, loitering and shady deal-making by the entrances, and reducing demand for adjacent development. On the other hand, the Phoenix Building–which we developed some 7 years ago with a mix of moderate-income and market-rate apartments–has provided affordable loft spaces for artists and others who want to live in an artistic environment. It’s known for photography studios, art shows/performances, and an eclectic vibe. Downtown could use more living units like that. Producing this means choosing the right financing program, marketing astutely, and managing effectively. The developer must have a clear intent at the outset: is it just to fill up a building with lower-income pesople? Or is it part of a greater vision for integration with the surroundings, and for harnessing a meaningful vibe? At Empire, the developer’s true intent remains a mystery.

As urban areas redevelop, existing, poorer populations are often replaced by newer, wealthier ones in a process known as gentrification. The Empire report strikes many as out of sync with the normal trajectory: low-income users will be injected into an already gentrifying neighborhood. In New York City, an example of the more familiar trajectory is seen above across the street from our apartment building where poorer residents on fixed incomes share the block with young professionals moving in (Harborview Section 8 housing ca. 1976 to the left, with our building ca. 2012 in the background, West 55th Street looking south between 10th and 11th Avenues). New York has a long history of affordable housing intertwined with market-rate housing in a variety of ways. Other cities in the US–at least in post-war period–not so much. Affordable housing needs to be integrated into any vibrant urban neighborhood–but all-to-often, it isn’t. With negative consequences for all.

Save it, but in the right way

Another out-of-town investor has recently explored turning the Thomas Jefferson Hotel (above, 17th Street North between First and Second Avenues) into low-income housing. This building, with its prominence on the skyline, and interior filled with high-ceilinged, ornate ballroom and restaurant space, is much better suited to a sensitive mixed-use plan (which may include restaurant, event space, housing, and hotel rooms) currently being explored by the local Thomas Jefferson Tower group. We need more investment from places outside of Birmingham. But in this case, the local group is much better attuned to how this building could integrate into the neighborhood.

In the end, we want to encourage all incomes groups to live downtown. But the appropriate way to situate the mix is complex, and needs to be thoughtfully planned. We’d love another Phoenix Building. But not another Bankhead Tower.

[thanks to Birmingham Public Library for the Heaviest Corner pic; bamaboy for the Bankhead Hotel pic; caedan for the TJ Hotel pic]

The Thomas Jefferson Hotel (pictured above, corner of 17th Street North and 2nd Avenue) has yet another chance for salvation due to the formation of a non-profit dedicated to stabilizing and restoring the 1929 structure to its former glory.Thomas Jefferson Tower, Inc. plans to acquire the building, stabilize it–and then work hard to put a viable restoration plan together.

This hotel opened within months of the Great Depression, and is a symbol of the last days of heady 1920’s optimism that had engulfed Birmingham real estate. It’s height and adornment testify to the belief that the City’s growth would extend inexorably westward; the Depression put a stop to such growth, and the hotel suffered somewhat from its relative isolation (in comparison to the Tutwiler Hotel, for instance).

The mix of larger main levels (with retail, restaurant, and ballrooms) and smaller upper floor plates means a mixed-use development with hotel, meeting, living, and retail/restaurant spaces could work well. The location is much more desirable than even a few years ago: the Phoenix Building lofts is across the street, Innovation Depot a block away, Railroad Park a few blocks south, and planning for bike lanes/revitalized Civil Rights district/bike-pedestrian bridge all within a few minutes’ walk. This building is also very prominent on the near skyline from the new Baron’s baseball park under construction. Yes, it will be a lot of work (George Wallace Suite, above)—but  a lot of other cities would kill to have such a fine piece of architecture to restore. They don’t build them like this anymore.

Please consider supporting this effort by signing up for the non-profit’s website, and following their twitter feed. The time is right to help make this project happen!

[thanks to dystopos for the exterior pic; istvan s. for the suite; naamanfletcher for the detail]

Art and its presence 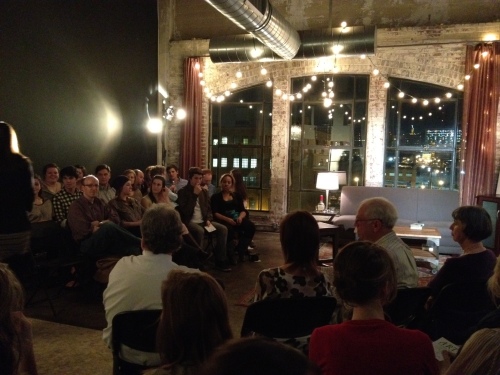 Last night I attended a fantastic production of “Art”, the play by Yasmina Reza, at the Phoenix Building downtown. Produced by A Bryan Photo in their studio loft space (above), the show features 3 fine actors from Los Angeles (tickets may still be available for tonight and Saturday here).

This sort of “underground” art helps make downtowns vibrant and exciting, and is just the sort of artistic energy we hoped would emerge when we developed the Phoenix 7 years ago, with 74 mixed-income units catering heavily to artists. Convinced that this type of loft development could succeed in Birmingham, we’ve seen a truly unique vibe evolve here. We’d love to see more. 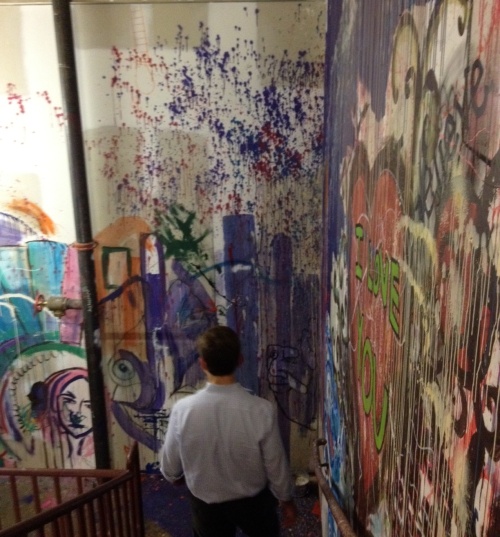 Who says a fire stair can't be fun

Above is another example of the artsy vibe at the Phoenix–this is one of the fire stairs which is currently a “work in progress”, with various artists from around the building able to add their impromptu expressions to the otherwise utilitarian space. This building project–and the unique energy it’s given to downtown–could not have happened without many financing components, including Federal Historic Tax Credits. Currently, Operation New Birmingham is hoping that the Alabama Legislature will pass a law creating State Historic Tax Credits, a complementary tool that many states already use to help get historic buildings (and their higher costs) renovated. Alabama’s major cities need this law to pass: it will help us all put together more projects, like the Phoenix, that turn vacant historic buildings into revenue producing, tax-paying, vibrancy-building partners in revitalization of downtowns and surrounding historic neighborhoods.

Let’s get that law passed. And let’s continue to find ways to promote art, and artists, as key elements of improving our urban neighborhoods.