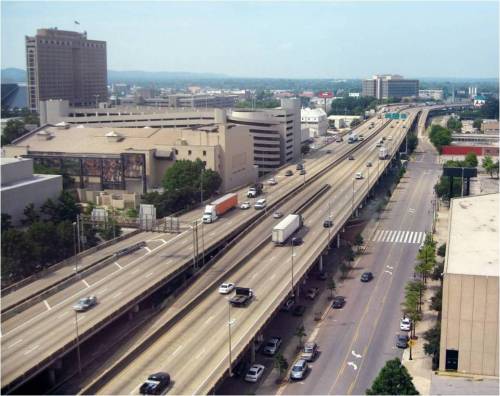 The I-20/59 interstate connector that runs through downtown (above) has been mentioned in this blog and by many over the years as a real impediment to integrating the convention center (seen on the right, or north) with the rest of downtown (seen on the left, or south). The 2004 City Center Master Plan suggests submerging this portion of the interstate, creating bridges and plazas above that would re-link these two areas of the center city. 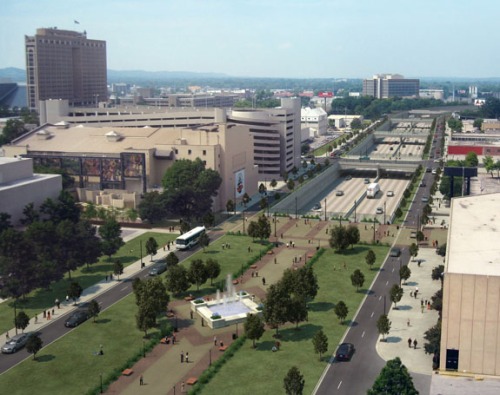 It's an improvement, but is it worth it?

Above is a rendering of the same view, with a suggestion of possible bridges, plazas, and landscaping. While preliminary engineering shows this can be accomplished, the price tag will certainly be greater than just replacing the existing connector with a similar elevated structure (which will have to be done anyway soon, as it nears the end of its useful life). Unless the highway is mostly covered over, allowing lots of green space and buildable area, will the effort be enough?

Over at Next American City, it’s worth reading this interview with John Norquist, current CEO of the Congress for the New Urbanism, where he discusses the success other cities have had in submerging or otherwise replacing similar downtown highways. If anyone comes up with another, less costly solution, we are all ears. But in order for the new BJCC entertainment district and the convention center itself to reach their potential, a solution does need to be found.

Beautiful in Boston, but the Big Dig was costly in many ways

The photo above is a new park located above a submerged highway in downtown Boston: a reminder of visible benefits this sort of project can bring to a city. The huge cost overruns and corruption associated with this Big Dig project are at the same time a cautionary tale. Birmingham’s plan is much smaller and less complex, to say the least. One way or another, we need to figure this one out. It’s too important not to.

[thanks to City of Birmingham, ONB and bhamwiki for the connector images and helveticafanatic for the Boston post-Big Dig pic]