A lot of our time recently has been spent on big issues: form based code, new urbanism, corporate footprints within historic neighborhoods, major public greenspace. It can be equally useful to examine the myriad small details that go into our built environment–the ones that are often taken for granted.

Today’s Design Review Committee meeting was a good place to reflect on these small things (and the hard work–often thankless–that this volunteer committee puts into all considerations, large and small). 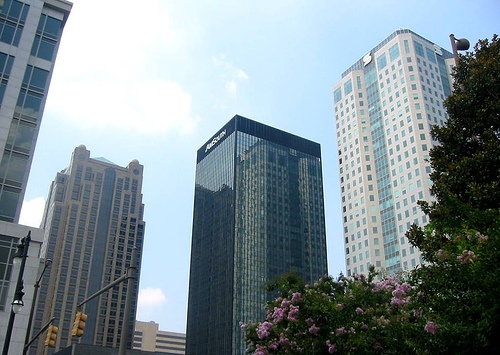 Signs of the (changing) times

The Wachovia Tower (formerly the SouthTrust Tower, shown above right a few years ago before that merger with Wachovia) is now the Wells Fargo Tower. Executives from Wells Fargo presented a proposal to replace the current abstract Wachovia logo (approximately the same size as the old SouthTrust “S”) with a much larger “Wells Fargo Bank” that stretches across the blank, dark spandrel glass of the penthouse, repeated on each of the four sides. Noting the importance of the chamfered penthouse corners, the Committee asked for just a few feet of breathing room to either side, slightly reducing the size of the sign. After the WF people initially objected–claiming the sign as presented was the perfect size to be seen “from all the major interstates”–they bowed to the reasonable assertion that the sign should be proportionally correct to the building and pleasing to the eye for pedestrians, not just stressed-out commuters on the freeways. Who, as Committee member Cheryl Morgan pointed out, should really be “concentrating on driving” rather than gazing at distant signage.

Illuminated signs (and this one will be lit with expensive, but energy-saving LEDs) are important symbolic markers on a skyline. I’m happy this building–whose branding has long suffered with tiny, illegible logos, is now getting a well-proportioned, clear sign that lives up to the importance of the southeastern headquarters for a major national bank. And I’m happy the Committee insisted on a very small, but important adjustment–improving the view of this sign from the surrounding streets and windows in the CBD.

There were also two other, similar cases, both again involving signage. One, for Sheppard-Harris and Associates in Fire Station No. 4 in the 200 block of 24th Street North (my firm designed the exterior renovation), won approval for both a new projecting (blade) sign which will illuminate at night, and a new, painted mural sign at the blank side of the building facing a parking lot along Third Avenue North (shown at left).  Dog Days of Birmingham, in the 100 block of 18th Street North in the old Hunter Furniture building  (which was discussed earlier here), won approval for a new blade sign but was denied approval for a painted sign on its side wall facing First Avenue. Their proposed painted signage did not show much artistic creativity (in contrast to the Fire House sign, designed by The Modern Brand), which in part led the Committee to judge it banal and redundant given the prominence of the large blade sign around the corner. I’m a big fan of signage downtown–a full post to come on that soon–so I hope that we can see a new proposal for a more thoughtfully designed painted sign at this location.

1. A crude picket fence (in lieu of a proper railing) constructed without a permit at a porch of an historic Highland Park house that the Committee agreed should be replaced with something more appropriate to the house;

2. A new landscape plan for a small parking lot directly east of the new Marriott Residence Inn in Five Points South whose landscaping and paving plan was passed–but whose many, excessive “No Parking–Tow Zone”-type signs strewn across the site were denied;

3. New wood replacement windows in the Blach’s Building annex in the 300 block of 20th Street North (to accommodate new loft apartments planned for that building) that the Committee easily approved;

All of these small-ish items aren’t big-ticket controversies or complex designs. But added up, these small bits (along with the larger and/or more prominent projects) help make our city’s environment special. One more pat on the back to the Design Review Committee for slogging through every item, however small, with an eye towards helping improve Birmingham’s built environment.

No parking deck required back in the day

[Full disclosure–the vote for my signage package was not unanimous: Chairman Sam Frazier cast the lone vote against, objecting to the blade sign illuminating at night. While perhaps unusual for a CPA to have illuminated signage, I felt it important in the burgeoning, (almost) 24-hour 2nd Avenue neighborhood for the company to have a night-time presence.]